In 2020 the birthplace of the skyscraper welcomes a new supertall building into its skyline, the Vista Tower. Conceived by Jeanne Gang, the colossus is the tallest building ever designed by a woman. Its 101 stories and 1,192 feet make the Vista Tower Chicago’s third tallest building, beating the Aon Center and narrowly falling short of the Trump International Hotel & Tower, which surpasses the Vista only because of its spire. Chicago’s third tallest building also sits at the intersection of Lakeshore Drive and the Chicago River, with big plans of integrating into the culture of Chicago’s Loop. 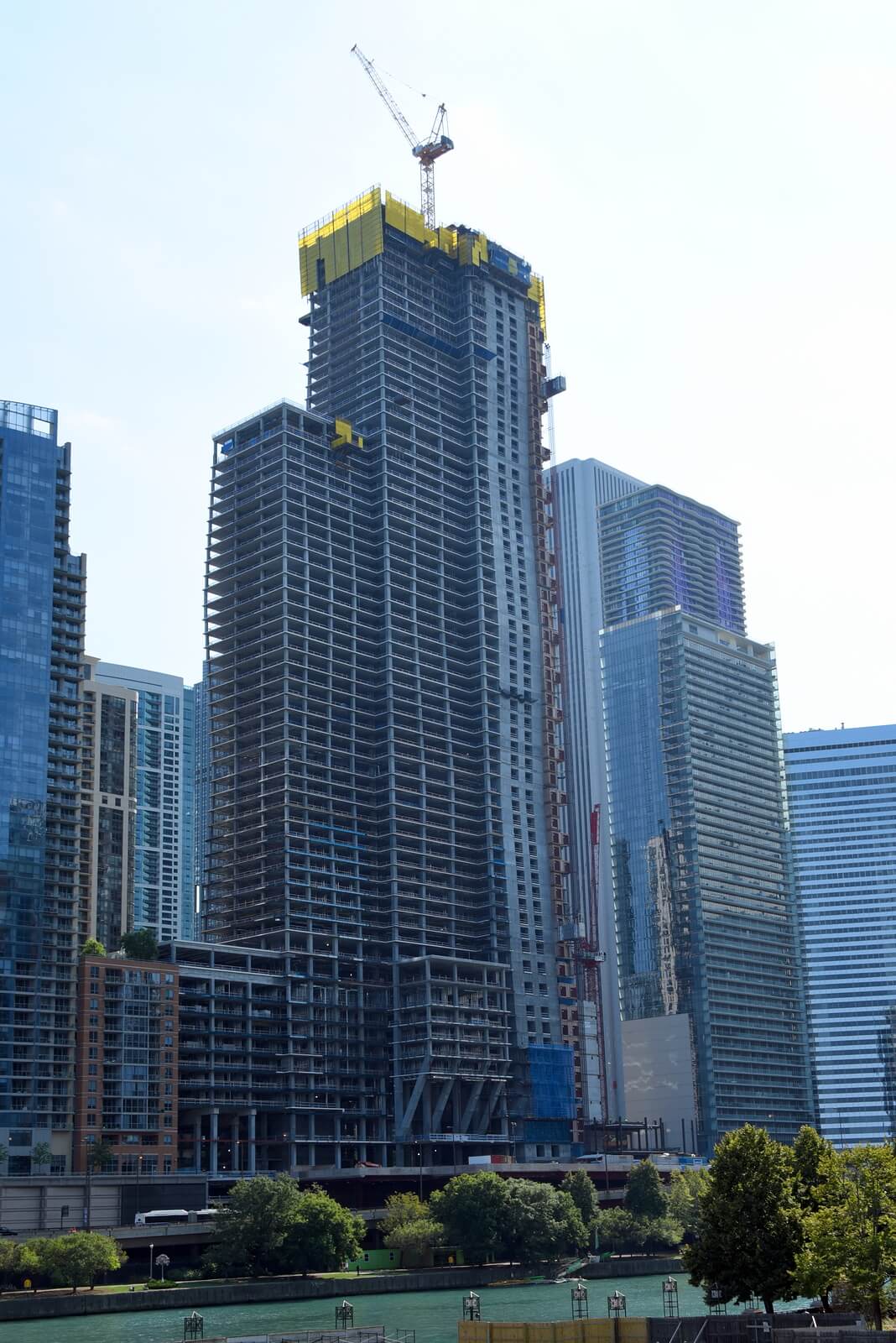 The Vista Tower is the joint development of Magellan Development Group (Chicago) and Wanda Group (China). The ambitious structure at 375 E. Wacker will have taken nearly $1 billion and 5 years to construct upon its 2020 opening. The project also demanded plenty of labor, and its massive workforce reflected the diverse leadership at Studio Gang. In fact, the president of  McHugh Construction Company, one company responsible for the construction of Vista, stated in an interview with Bisnow that women make up around 5% of their workforce. Others working on the project reported noticing more woman on every level of construction, from project managers to ironworkers.

The diversity of the workforce behind Vista is just one of the ways that Jeanne Gang’s atypical tower joins the movement of thoughtful urban design. The design of the structure offers even more intrigue and insight.

Three towers of ascending height comprise the Vista’s 101 stories. The towers are made up of stacked frustums. But what exactly is a frustum? A frustum is a shape best described as a truncated pyramid or cone. In other words, the point of the pyramid is sliced off. Alternating and stacking these massive 13 story frustums creates the shape of Vista’s three towers, DNA-like columns curving into the sky. The result of this design is a total lack of perfectly horizontal or vertical lines in the facade of the skyscraper. It also proved challenging to construct stably, requiring the meticulous of support columns throughout Vista’s 101 unique floors.

The supertall structure also trail-blazes with its wind-protection techniques. After engineers warned of Vista’s susceptibility to wind, an update on the already-approved building plan was submitted. That plan included a “blow through” level, which allows wind to pass freely and significantly reduces stress on the building. This design marks the first of its kind in the Windy City, and further reflects Studio Gang’s commitment to propelling Chicago into conversation with cities of architectural innovation, like New York City or Dubai.

The Vista Tower is a part of Chicago’s massive downtown development boom. It won’t be the last, or the tallest building to reshape Chicago’s iconic skyline. Despite an impending coronavirus-related recession, plans for the new Tribune tower march forward. The Tribune Tower will jump in line, becoming Chicago’s second tallest building and bumping the Vista down a peg just years after completion. But until they top off the Tribune Tower, Vista remains the newest addition to the loop neighborhood, and Studio Gang hopes it improves Chicago’s downtown experience. The building includes a functional ground and terrace level. The public mall boasts restaurants, retail shops, scenic overlooks, and improved access to the riverfront.

Inside the tower and out of public view are 169 hotel rooms and 405 condominium units. The 5-star hotel occupies the lower levels, with condos starting above the hotel and reaching to the very tip of the building. If you hadn’t guessed already, the condos are quite expensive. 4 units made Curbed’s 2020 countdown of Chicago’s priciest homes. Penthouse 8901 will run you over $11 million, but at least it comes with some great amenities. The residency offers indoor and outdoor pools, top-of-the-line fitness facilities, and a dog walking area. There’s also a golf simulator, a movie theater, and a demonstration kitchen for residents’ wildest in-home entertainment needs. All that’s not to mention the magnificent views, quartz countertops, Gaggenau appliances, and his/hers bathrooms that adorn Vista units.

Amid the COVID-19 pandemic, the luxurious Vista tower is set to open on-time in the 2020 summer. With many of its units already sold and a publicly lauded design, the city seems glad to welcome the giant into its evolving downtown.

Search for Homes In Vista Tower & the Loop